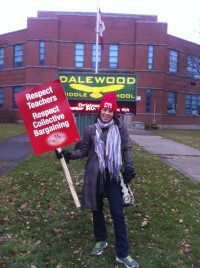 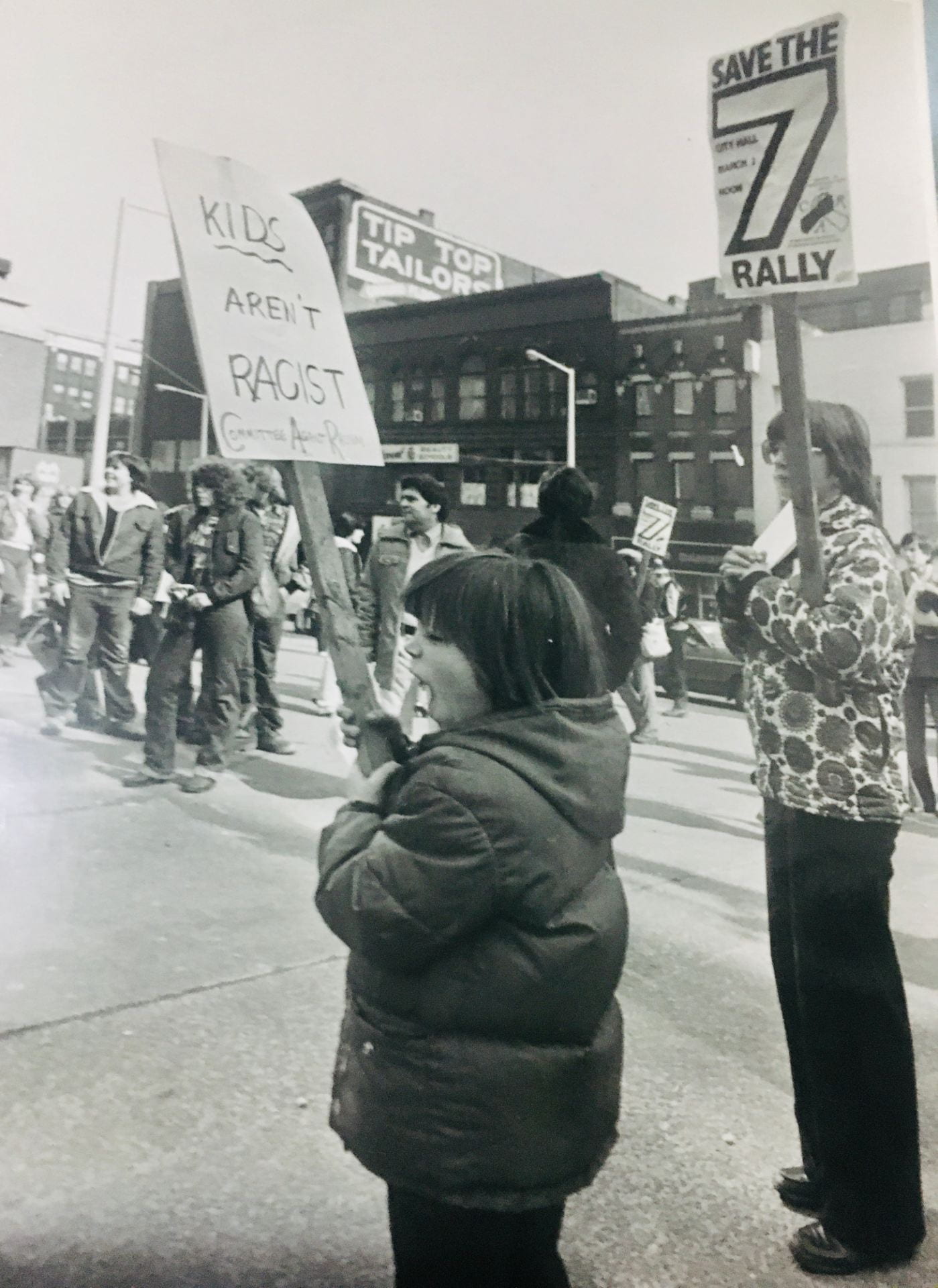 I am an ETFO teacher in Ontario. I strike because I am committed to equity and social justice, not just in schools, but in life. I am proud to be part of the Ontario Teacher’s Federation (ETFO)  whose mandate is to ensure that all people have access to fair, safe and quality learning and working environments. As an educator (I can’t help it) I see this as a teachable moment for the thousands of citizens – children and adults alike – that we must never stay silent to injustices. As educators, it is our job to teach our citizens to work toward a world where all people have opportunities to learn, strive, be healthy and have joy in our professions, communities and family life. The Education sector must continue to move forward in silencing inequities, racism, gender bias,  and to voice our support for inclusivity of LGBTQ members and students and promote greater participation of First Nations, Métis and Inuit.

“Canada’s labour movement has a long history of improving workers’ everyday lives. We fought for and won many of the rights enjoyed by all workers today – minimum wages, overtime pay, workplace safety standards, maternity and parental leave, vacation pay, and protection from discrimination and harassment” (https://canadianlabour.ca/uncategorized/why-unions-history-labour-canada/. 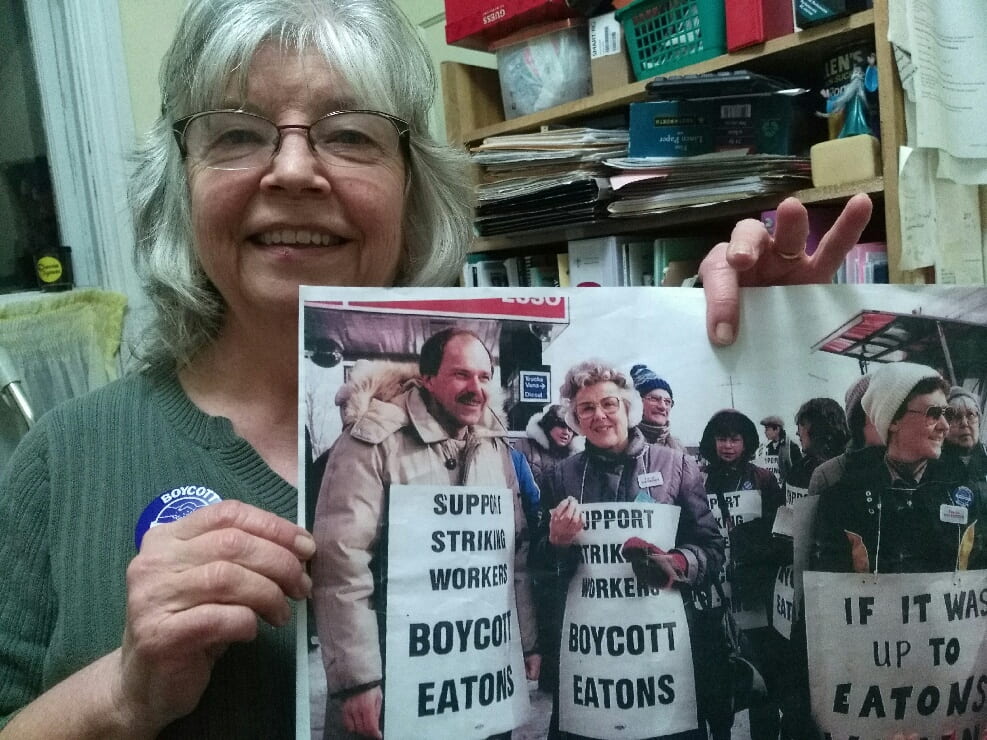 My first real memory of participating in a protest was when I was 12 years old. But of course, there were many before (and many after). It was 1984, a few weeks before Christmas. About 1,500 workers at the six Eatons stores across Ontario walked out, including Hamilton. Like many nights before, I remember staying up late, making signs, pamphlets, stickers, posters and of course hanging out with all the other kids my age while the parents organized, collaborated and discussed the events for the next day (or next initiative).   I remember how cold it was on that November day and yet it didn’t seem to deter the thousands of folks who showed up stormed inside Eaton’s to show support for the workers. We chanted “Boycott Eatons” and walked right into the department store in full solidarity with the workers (mostly women at the time).  According to union organizer Sue Grange, about 80 percent of the striking workers were women and faced a huge discrepancy in pay, poor work conditions and job insecurity. (source:https://www.tvo.org/article/when-strikers-stormed-eatons-flagship-department-store)

My family was evicted twice during Urban Renewal initiatives. “City building” created roads and apartment buildings, but didn’t much care about low-income renters! This eventually carved the path for being advocates for safe and affordable communities.  I also remember the 1005 Local Stelco Strike. This is hard to forget as it was a 125-day walk-out with 12,500 striking workers at Stelco’s Hilton Works in Hamilton. And of course, I also spent a lot of time walking the picket line with my family. 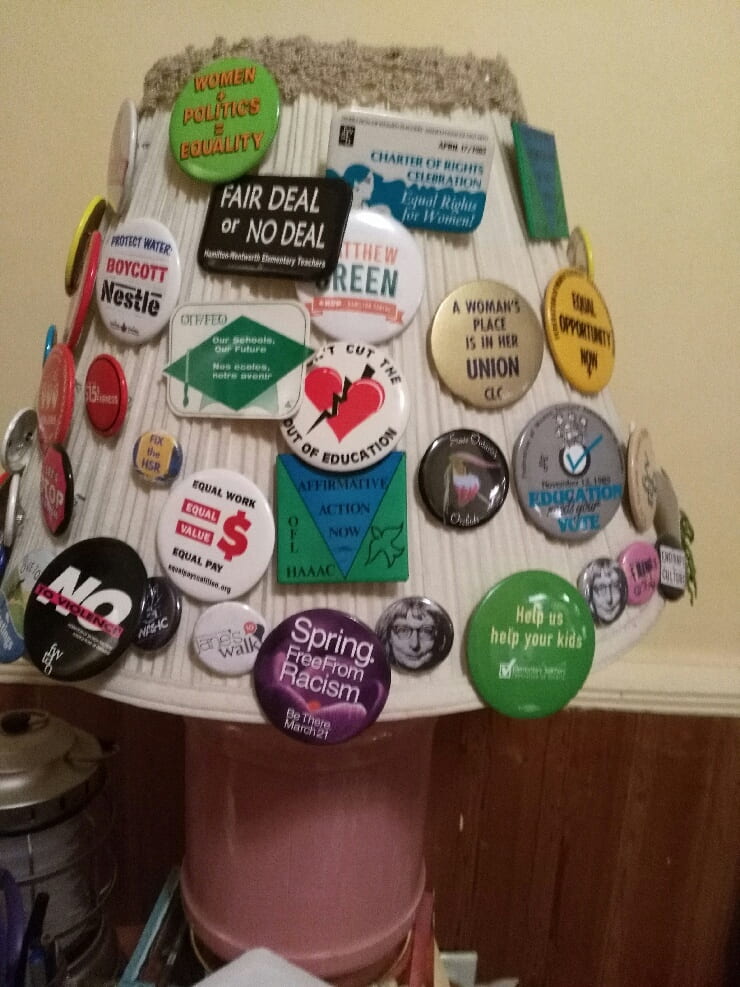 My parents were (and still are)  strong activists which are how I remember my childhood – attending protests, marches, rallies and many many committee meetings (often held at our house).

I have never missed marching in the Labour Day Parade. From an early age I was exposed to “the Federation of Women Teachers Associations of Ontario” (FWTAO) which represented women teachers for over 75 years. It seemed like our house was filled with people working (volunteering) tirelessly to ameliorate one cause or another. Full ashtrays, good music playing in the background and close friends finding ways to make a difference. Throughout my years in Hamilton, I was exposed to central American Solidarity Human Rights groups, Tools for Peace (human hights, social justice) The Hamiton and Area Affirmative Action Coalition, HAAAC and worked with the O.F.L. (This group advocated for equal pay and non-traditional jobs).

My family was evicted twice during Urban Renewal initiatives. “City building” created roads and apartment buildings, but didn’t much care about low-income renters! This eventually carved the path for being advocates for safe and affordable communities.

When I was growing up in Hamilton, a student at HWDSB, men and women teachers were in separate unions, although I think they worked together. Eventually, they officially joined together to form ETFO.  Since my mother was part of the Union executive at that time, I know there were many meetings. My mom recalls, “ I remember that some women were uncertain of joining together and that men would “take over”, and not advocate for women’s issues or rights. Over the years teachers worked within the larger labour community for “No to Violence against Women”, better maternity benefits, affirmative action etc. Teachers advocated and fought for smaller class sizes, help for struggling students and fought continually against cutbacks to education.  Better working conditions are better learning conditions.

Check out my about.me profile!

Powered by WordPress | Hosted by Edublogs | Protected by CloudFlare